The ultimate everyday shortboard for surf in the thigh-high up to solid overhead range? That's what a lot of people are saying about the Pyzalien 2, a slight refresh and refinement of the classic Pyzalien, one of shaper Jon Pyzel's favourite ever models.

It's not an all-out high-performance shortboard and it's definitely not in the funboard or groveller category, but will serve as either in all but the biggest or smallest conditions you're likely to want to surf a shortboard in. So far we've heard nothing but very enthusiastic praise for this board.

The Pyzalien 2 has slightly thinner, more foiled-out rails than the original, which had very thick rails and felt maybe a bit clunky. What you’ll also notice is the smooth, clean outline, no hips or kinks.

Meanwhile the swallow tail adds to the snappiness, push and hold, so you never really need to nurse it. The pronounced vee out the tail releases pressure and lets you push hard through turns without losing control.

“[The Pyzalien]’s always been one of my favourite boards,” says Jon Pyzel, “and it’s one of those designs that almost every single person that rides it really likes it.”

“I made a few small changes compared to the Pyzalien, the biggest one being a refinement through the rail. The original Pyzalien had a really full, chunky rail, and you’d actually order it a little bit thinner than your normal shortboard. This board has more curve through the deck, so it has a more refined rail.

"Beyond that we’ve kept pretty much everything the same. It has a pretty wide nose, but not super wide by today’s standards.”

Order 2 to 3 inches shorter than your "standard shortboard", says Pyzel... but is there even such a thing anymore? This'll be go-to shortboard in anything less than fully macking surf. 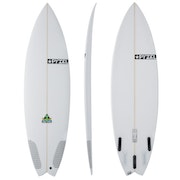 An amazing option for the One Board Quiver- The Pyzalien 2 is a fresh take on an older favorite! For years the original Pyzalien has been an all-time favorite model, so we decided to take a fresh approach to it and release the new and improved Pyzalien 2 for 2020. The Pyzalien 2 works great in a huge variety of waves, from points to reefs to beach break, and has one of the most user friendly, yet high performance rockers weve made, smooth and clean, with med/low entry running through to med+ tail rocker. The bottom has a single concave starting in the nose, running under the front foot, blending into double concave and then VEE in the last 6 inches of the tail which adds release that helps ease you into turns. This rocker/bottom combo gives the board quick, effortless speed from take-off, while increasing the responsiveness and control, allowing for easier rail to rail transitions at high speeds. The outline is clean and simple, no hips or wings just a fuller nose and wider tail which keeps the board very fast and drivey, making for easy flow through flatter sections. One of the biggest changes from the Original is a more domed deck with refined rails, so we recommend that you order it the same thickness, 1/4 to 1/2 inch wider and 2-3 inches shorter than your standard shortboard. Comes standard with a clean swallow tail for added snappiness and spark! This is a great Daily Driver board with a High Performance personality, built for most levels of surfer, from novice to Pro.