The Ghost, John John Florence’s weapon of choice throughout his 2017 world-title-winning campaign, is back. That year saw of the best surfing ever done by anyone on the tour, and the Ghost was at the heart of numerous iconic moments – the alley-oop at Bells, the unique lines and searing carves at J-Bay, the demolition of the field at Margaret Bay.

But this isn’t just a shape for tour-level surfers. According to Pyzel, it’s “possibly the first truly high-performance board that works great for all levels of surfer.” It’s exactly the same board as in years previous – same dimensions, same outline, same curves – except for the small red JJF flag on the deck.

It’s not exactly a board for everyday conditions, not if your everyday is the UK – in 2ft mush you realistically won’t get the best out of the board, your surfing, or the conditions. But the Ghost is still pretty versatile, and when the waves are anywhere from half-decent to double-overhead and barrelling, you won’t want to go into battle on anything else.

“You can do the best surfing in your life on it,” wrote the surf blog Beach Grit’s resident surfboard reviewer. “When catching a wave it goes from low speed to planing incredibly easily and effectively. It knifes into a late drop better than any board I’ve ridden.”

Order it as long as you are tall or several inches longer. 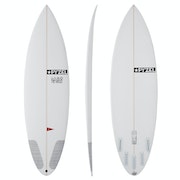