Year after year the Flying Frog has been one of Surfdome's best-selling boards, and it’s not hard to see why. If you want a user-friendly, versatile board that combines the ease of a mini-mal with the agility a shortboard, this high-volume all-rounder is hard to beat.

When the waves are gutless and below-par, here's a board that will never fail to get you amped to get out there. But the FF can also be surfed dynamically from rail to rail, and won't let you down when the surf picks up a bit. Paddle in early and easy on that reassuring front-end foam, find the sweet spot of the wide, stable middle section as you pump or trim down the line, and when you're ready shift your weight onto the back foot and put the board on rail exactly as you would with a shortboard.

The FF is that rare board that goes equally well in pretty much everything. Yes it goes great when it's small, thanks its extensive surface area, high volume and flat entry rocker – but the relatively narrow tail, in addition to being more responsive, will also give you some bite and hold on bigger and/or steeper faces.

The all-white version comes in a thruster set-up, and would be the perfect next step after a larger mini-mal shape – in fact it makes a great beginner-style board itself when ordered over 7ft. For those of a retro persuasion, we also stock the Flying Frog as a 5-fin with a single/quad set-up. 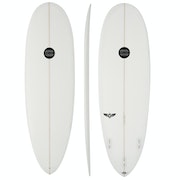