Lost shaper Matt "Mayhem" Biolos teams up with Mark "MR" Richards to bring you this epic modern twin fin + trailer fish. Richards revolutionised the twin fin as both a shaper and surfer in the late '70s and early '80s, riding his unique twin-fin design to four successive world titles. Then Biolos came along in the thruster-dominated '90s and reinvigorated the twinny with his iconic Round Nose Fish. This is a match made in surfboard heaven!

MR's classic lines get the Mayhem treatment, undergoing a few subtle tweaks that update MR's original fish design for the modern era while incorporating Biolos's signature small-wave performance prowess. Those tweaks include a lower entry rocker and added width throughout for gobs of glide in gutless surf. But the super speedy down soft rails and performance tail rocker of the original are left in tact, so it still turns proper and precise.

The end result is a board you can really rip on but still zips along in the small stuff with speed and flow. It can handle some real size too – Kirra Pinkerton has ridden it beautifully in mega Mentawai barrels (comfortably double-overhead), Noa Mizuno likewise in Hawaii.

Finished off with airbrushed rails for a classic MR colour scheme. A beauty. 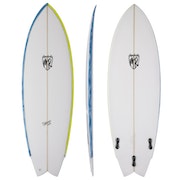