The unrivalled drag-free twin-fin feeling but the drive and top-to-bottom lines of a thruster. That's what the Misc. is all about.

What is the Misc.? To quote the text printed on the deck of the board itself (one of several typically Haydenesque touches), it's "not a twin fin but a confused blend of a thruster and a twin."

"Titled Misc. and pronounced /ˌmɪsəˈleɪnɪəs/ or miscellaneous, this is not a twinny nor a thruster but a hybrid design. Word association includes terms such as post haste, like a bat out of hell, on the double, velacious, in a jiffy, accelerated, supersonic…”

First things first, it's fast. A beautiful outline in FutureFlex technology, the Misc. is a lovely-looking board that guarantees heaps of high-velocity fun.

But don't pigeonhole it in the "funboard" category just yet. Hayden Cox's starting premise was that you shouldn't have to compromise your surfing to ride at twin, so it's meant to go top-to-bottom and be surfed just like a performance board.

In terms of the sensations underfoot, "flow" and "glide" are still very much applicable – you still get that twin-fin feeling, arguably the best feeling there is. But twin fins are sometimes of accused of "dumbing down" a person's surfing, and the Misc. has been designed as a direct rebuttal of that accusation.

A couple of performance tweaks worth mentioning: The wing has been placed quite a way back behind the front fins – unusually far back, in fact. These wings release water, so their unique positioning extends the portion of the rail line you can actually engage and thus provides greater hold throughout turns.

The fin-boxes themselves have also been positioned further back in the board, and this will likewise heighten control and hold. Meanwhile they're angled a little straighter to maximise drag-free down-the-line velocity (perfect for hitting big open-face carves at speed, one of the Misc.'s specialities). All of these elements are blended together with Hayden's trademark fluid lines.

An excellent summer board, with more or less unrivalled speed-generating capacities in small waves, the Misc. is nonetheless a viable option in solid surf, and much more of an all-rounder than a traditional twin. You can ride it as a 2+1 set-up with a smaller trailer or stabiliser fin in the middle, or stick to the side boxes for the true performance-twin experience.

Go several inches shorter than your normal shortboard. Alternatively, ordered in a slightly larger size it would make a very good first shortboard for a beginner-intermediate level surfer.

FutureFlex technology ranks highly in terms of both durability and performance. The parabolic carbon frame in the laminate is the key to the latter, getting the optimal flex from the EPS blank; it stores up and releases energy through turns for an amazingly quick and lively feel. 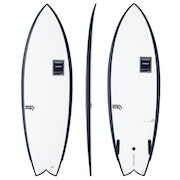